Next week, Canada will be celebrating the third anniversary of its federally legal adult-use market that launched in October 2018. Sales have grown 77% to C$3.4 billion over the past twelve months through July and are likely to exceed C$4 billion in 2021. While year-over-year growth has been slowing, partially due to the pandemic, it has remained strong: 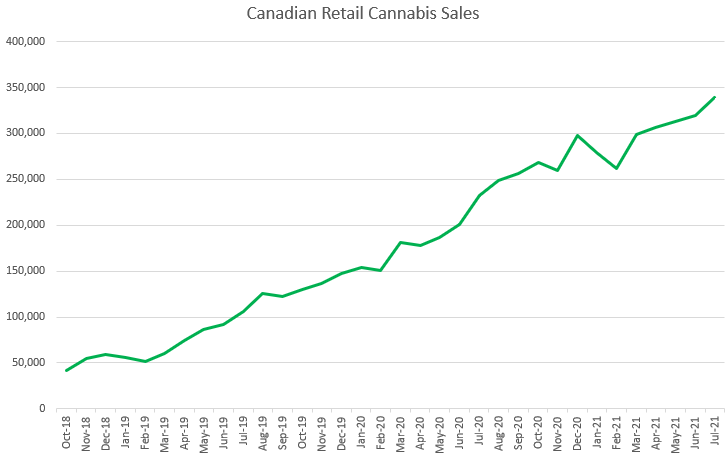 In contrast to the development of the adult-use market in Canada, investors have not experienced success since Canada legalized. The New Cannabis Ventures Canadian Cannabis LP Index has declined by 79% over the past three years:

Some of the poor performance is due to investors being overly optimistic three years ago, but the reality is that most publicly traded companies in the Canadian cannabis industry have failed to scale properly. The largest companies are typically unprofitable and are generally burdened with too much inventory and too much production capacity. This week, Tilray reported year-over-year growth of 38% in its adult-use cannabis revenue, but, on an apples-to-apples basis incorporating legacy Tilray revenue from a year ago, revenue actually fell by our estimate by 7% at a time when the overall market grew by 47%. Last month, Aurora Cannabis reported a large decline in adult-use cannabis sales and essentially threw in the towel, saying it had decided to focus more on medical markets going forward.

We have long discussed the many structural challenges of the market, including restrictions on advertising and packaging, restrictive rules like a 10mg THC cap per package on edibles and the requirement in most provinces that all sales be made directly to the province, which creates a monopoly buyer. Initially, the market was limited by a lack of stores in its largest province, Ontario, as well.

While the outlook for the largest Canadian producers is likely not that positive in our view, mainly due to their still high valuations, we have discussed that there are opportunities for investors to participate in the growth of the market nonetheless. In December, we shared several ideas of how to participate in its growth, and we followed up six months ago with our outlook for consolidation in the industry potentially benefiting smaller LPs. We continue to believe that some smaller LPs could benefit from consolidation. In fact, on the conference call this week, Tilray’s CEO Irwin Simon suggested that his company will be active on that front. He and others have noted how fragmented the market is. The largest companies don’t have dominant positioning, and recent data suggests that most are actually losing share.

Just as we expect continued consolidation to potentially benefit smaller LPs, another part of the market that we called out in December, retailers, could benefit as well. This week, Sundial announced the pending acquisition of Alcanna, which owns the majority of publicly traded retailer Nova Cannabis. This follows its acquisition earlier this year of Inner Spirit Holdings. While certainly the other retailers, which, in our view, benefit from many of the market challenges, could be acquisition targets, we think that they are also in a position to continue to consolidate the market as a buyer too.

We believe that investors are overly pessimistic about the Canadian cannabis sector. While the structural challenges remain, we expect robust growth will continue. Ontario has finally added a substantial number of stores, and the BC market, which has been poorly penetrated by the legal providers, has been showing strong growth lately. Flower and pre-rolls continue to represent over 3/4 of the overall market, as the derivative products, which were first introduced two years ago, have ramped very slowly. The abundance of low-priced flower has helped drive illicit market consumers into the legal stores, and these buyers are adding some of these higher-margin products to their basket. The continued expansion of non-flower products will help drive profitable growth for those companies that are able to bring products to market successfully.

The largest Canadian LPs have long commanded too much focus, and we think investors would be well served to explore smaller LPs and retailers. To investors, Canadian legalization has been a bust so far, but we think opportunities abound as the market matures.

Indiva is Canada’s #1 producer and distributor of cannabis infused edibles nationally, boasting 46% market share according to Hyfire data. Based in London, Ontario, Indiva operates a lean business with the company’s products being sold in nine provinces and two territories, plus Medical Cannabis by Shoppers, CannMart & Abba Medix. After its success with Bhang® Chocolate and Wanna™ gummies, Indiva is looking to go deeper into all provinces as it carefully expands into new categories, such as baked goods.

Get up to speed by visiting the Indiva Investor Dashboard that we maintain on their behalf as a client of New Cannabis Ventures. Click the blue Follow Company button in order to stay up to date with their progress.