The Public Cannabis Company Revenue & Income Tracker, managed by New Cannabis Ventures, ranks the top revenue producing cannabis stocks that generate industry sales of more than US$10 million per quarter (C$13.2 million). This data-driven, fact-based tracker will continually update based on new financial filings so that readers can stay up to date. Companies must file with the SEC or SEDAR and be current to be considered for inclusion. Please note that we have raised the minimum quarterly revenue several times as the industry has scaled up, including from US$7.5 million in June 2020, from US$5.0 million in October 2019 and from US$2.5 million in May 2019. We expect to raise the minimum again when we publish in early December to US$12.5 million.

43 companies currently qualify for inclusion, with 29 filing in U.S. dollars and 14 in the Canadian currency, which is up four from our update a month ago. Among American companies, Cronos Group (TSX: CRON) (NASDAQ: CRON), Indus Holdings (CSE: INDS) (OTC: INDXF), Marimed (OTC: MRMD) and Village Farms (TSX: VFF) all rejoined the list. In Canada, Zenabis (TSX: ZENA) (OTC: ZBISF) rejoined, while Sundial (NASDAQ: SNDL) was removed due to no longer qualifying. We continue to expect additional companies to qualify in the future.

In the first part of November, several of the largest companies by revenue reported, including Scotts Miracle-Gro (NYSE: SMG), Green Thumb Industries (CSE: GTII) (OTC: GTBIF) and GW Pharma (NASDAQ: GWPH). The Hawthorne division of Scotts ended the year with revenue of $1.08 billion, up 61%, and the company is guiding for fiscal 2021 revenue to grow 15-20%. GTI had been expected to generate revenue of $134 million, up 97% from a year ago, and the actual revenue, all organic, was 131% above year-ago levels. The company’s adjusted EBITDA expanded by more than 50% compared to Q2, reaching over $53 million. GW Pharma also soundly beat expectations, as analysts had forecast revenue of $127 million. 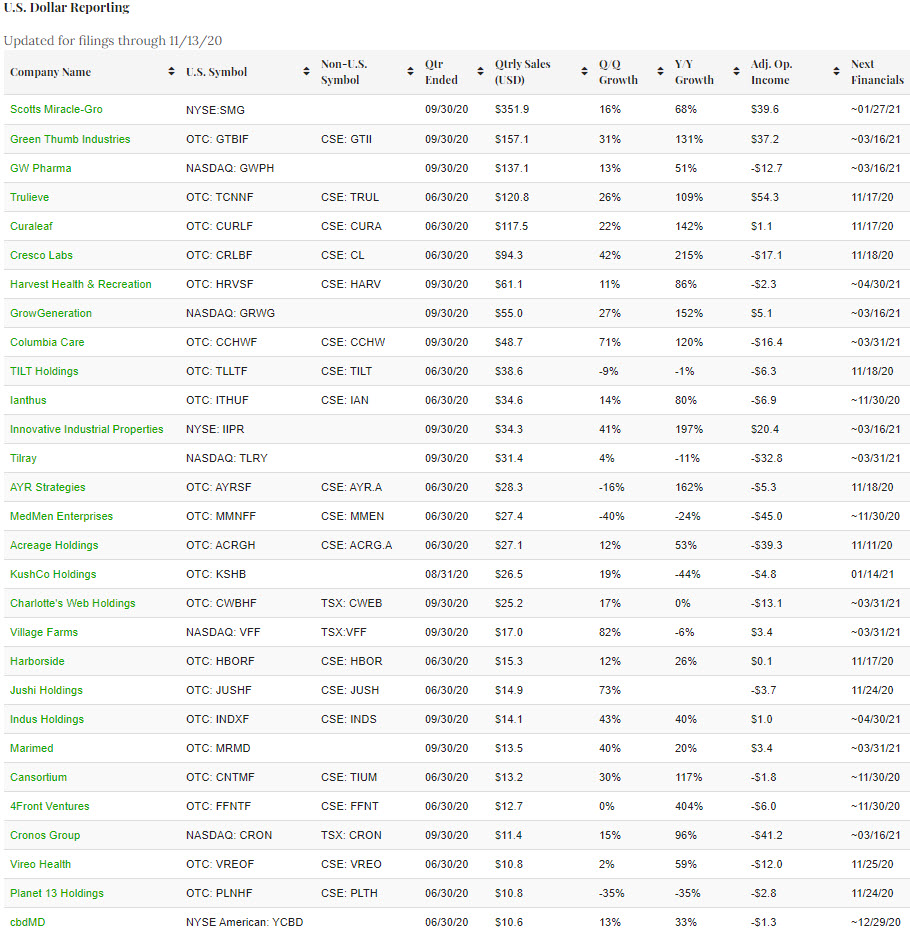 Over the balance of November, several other leading companies will be reporting financials, including three of the largest MSOs by revenue: Trulieve (CSE: TRUL) (OTC: TCNNF), Curaleaf Holdings (CSE: CURA) (OTC: CURLF) and Cresco Labs (CSE: CL) (OTC: CRLBF). Other companies that have reported revenue in excess of $25 million in the previous quarter that have scheduled release dates include TILT Holdings (CSE: TILT) (OTC: TLLTF) and Ayr Strategies (CSE: AYR.A) (OTC: AYRSF).

Trulieve is unlikely to retain what had been its position as the top-ranked MSO in terms of revenue. According to Sentieo, analysts project revenue will increase almost 10% sequentially to $131 million in Q3. Curaleaf, on the other hand, is expected to surpass GTI, as analysts project Q3 revenue to jump 63% to $191 million. A large driver of the growth is the recent acquisition of Grassroots Cannabis, which closed in late July. Q3 won’t include the revenue generated by Grassroots prior to the close. In Q2, Curaleaf described its pro forma revenue, which included not only Grassroots but also its closed acquisition of Arrow Alternative Care in Connecticut, as $165.4 million. Cresco Labs, which has some similar growth drivers to GTI in Illinois and Pennsylvania, is expected to cross the $100 million milestone, growing revenue in Q3 to $115 million, up 22% sequentially. In Q2, its revenue was 23% higher than the analyst consensus.

TILT Holdings pre-announced its financial results for Q3, indicating its revenue expanded to $40-41 million, with adjusted EBITDA more than doubling to $2.5-3 million. Ayr Strategies, which operates in two markets hit hard by COVID-19, Massachusetts and Nevada, is expected to rebound sharply in Q3, with sales projected at $45.1 million. This would represent sequential growth of 59% and annual growth of 40%.

The two largest Canadian LPs reported in the first half of November. Canopy Growth (TSX: WEED) (NYSE: CGC) posted strong growth driven by its B2B cannabis in Canada as well as strength in its non-cannabis businesses. Ahead of the financial report, it had been expected to have generated revenue in its fiscal Q2 of $117 million, so the quarter was materially better than expected. The adjusted operating loss included some one-time items. Aurora Cannabis (TSX: ACB) (NYSE: ACB) had already pre-announced its fiscal Q1, and the revenue was in line with the prior guidance. Its adjusted operating income improved from Q4. 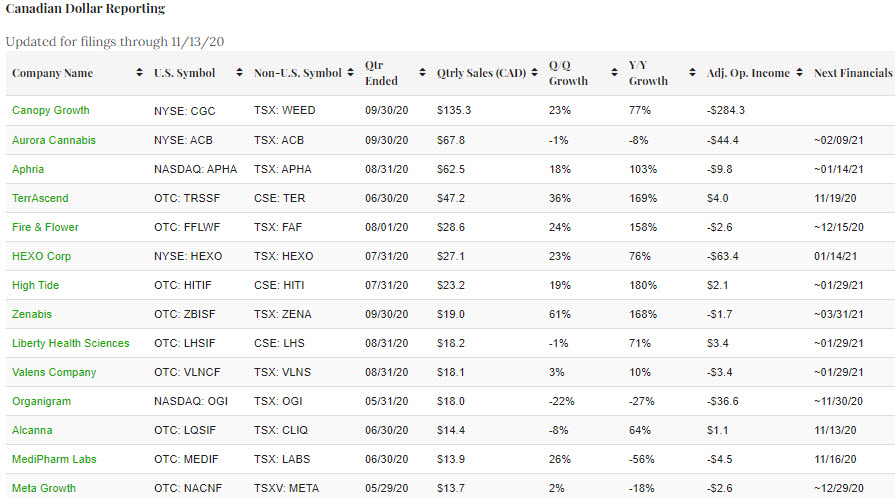 Over the balance of November, TerrAscend (CSE: TER) (OTC: TRSSF), which derives the vast majority of its revenue from its American operations, will report its Q3 on the 19th. The company pre-announced the quarter’s financial results earlier this month, indicating it generated revenue of C$51 million, with a 35% adjusted EBITDA margin. Organigram (TSX: OGI) (NASDAQ: OGI) hasn’t yet scheduled its Q4 investor call. The company is expected to report revenue of C$21 million, 17% above Q3, according to Sentieo. Alcanna (TSX: CLIQ) (OTC: LQSIF) has pre-announced its Q3 cannabis revenue at approximately C$15.9 million, up 23% from a year ago. The company will host a call on the 16th.

For those interested in more information about companies reporting, we publish comprehensive earnings previews for subscribers at 420 Investor, including for Focus List members Alcanna, Cresco Labs, Curaleaf, Organigram, TerrAscend and Trulieve.