This week, President Biden, not much of a friend to our industry since becoming President, surprised everyone by pardoning cannabis consumers in federal prison and also said he would order a review of the DEA scheduling. We are excited by the move, but we do wonder if it will lead to other changes or just be a one-time adjustment for approximately 6,500 people.

Cannabis stocks exploded late in the day on Thursday, after the announcement, and retreated somewhat on Friday. For the week, the New Cannabis Ventures Global Cannabis Stock Index soared 12.2%, lifting to 12.63 from an all-time closing low of 11.26 at the end of September.

In our view, many stocks went up too much initially, while others failed to do so, creating opportunities for investors to reposition. For the week, the American Cannabis Operator Index rose 35.6%. It was already the best part of the market before the surge, and it is down now 39.9% year-to-date. While this is a big decline, it’s a lot better than the 61.6% fall that the GCSI has endured.

The American Cannabis Operator Index wasn’t all that rallied. We note that our favorite sub-sector, ancillary stocks, didn’t rally that much. The Ancillary Cannabis Index rose only 7.9% during the week. It is still down a stunning 70.1% in 2022. The Canadian Cannabis LP Index rallied 11.4% during the week. One needs to look at the Tier 1 names, Aurora Cannabis, Canopy Growth, HEXO Corp., Organigram and Tilray. These 5 stocks rallied a lot on Thursday, but they tanked on Friday. We had warned 420 Investor subscribers at the end of the day Thursday to expect a retracement. For the week, the Tier 1 index rose just 4.3%, falling 17.4% on Friday after rising 20.4% on Thursday. Here is the week’s performance for these 5 names and three other actively traded LPs: 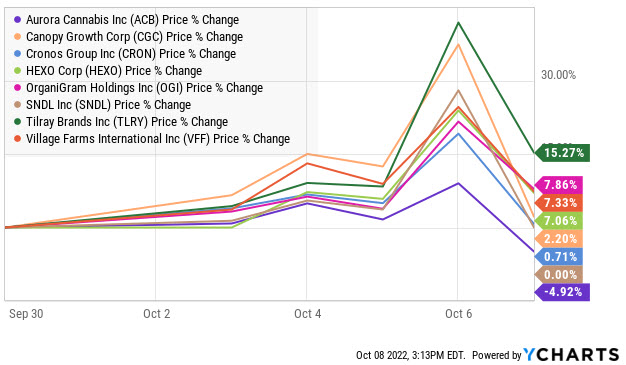 Tilray was the only one of these stocks that rallied more than the GCSI this week, and Aurora Cannabis actually declined. A lot has to happen for Canadian LPs to enter the U.S., in our view, and it will not be easy for them to acquire assets. Investors should focus on Canadian LPs that can excel in Canada and in other markets that develop, like in Europe. For a few of these companies, legalization in the U.S., should it happen, would open the door to investors with large stakes potentially buying the rest of the company.

While Biden’s move may mean very little to the industry ultimately, it could lead to great things such as the ability of American cannabis companies to list on major exchanges rather than the OTC or the elimination of 280E taxation, which would help cash flow and improve profitability. We also worry that rescheduling could lead to the FDA taking over regulatory control of the industry.

Given how limited Biden’s plan’s impact will be initially, why did stocks explode higher initially? Perhaps investors assumed that more will take place, though we warn that it may not. The buying in our view comes from two sources. First, those that are short have been very successful, and the sudden “bad news” may have shaken them to buy, locking in profits. Second, and perhaps more importantly, we believe that many people have seen how attractive cannabis stocks have become but were waiting for a bottom. Perhaps they jumped aboard!

We started discussing in June how we envisioned a better market for cannabis stocks in H2, but the market was hammered hard in September. The downtrend may have ended, but if the overall stock market remains in a bear mode, it will be hard to advance significantly unless 280E gets wiped out or the exchanges open up. Let’s hope that the overall bear market for stocks ends soon, and let’s hope as well for continued improvements in the laws and regulations that our industry faces.

This week’s newsletter is sponsored by Alvarez & Marsal Canada Inc. 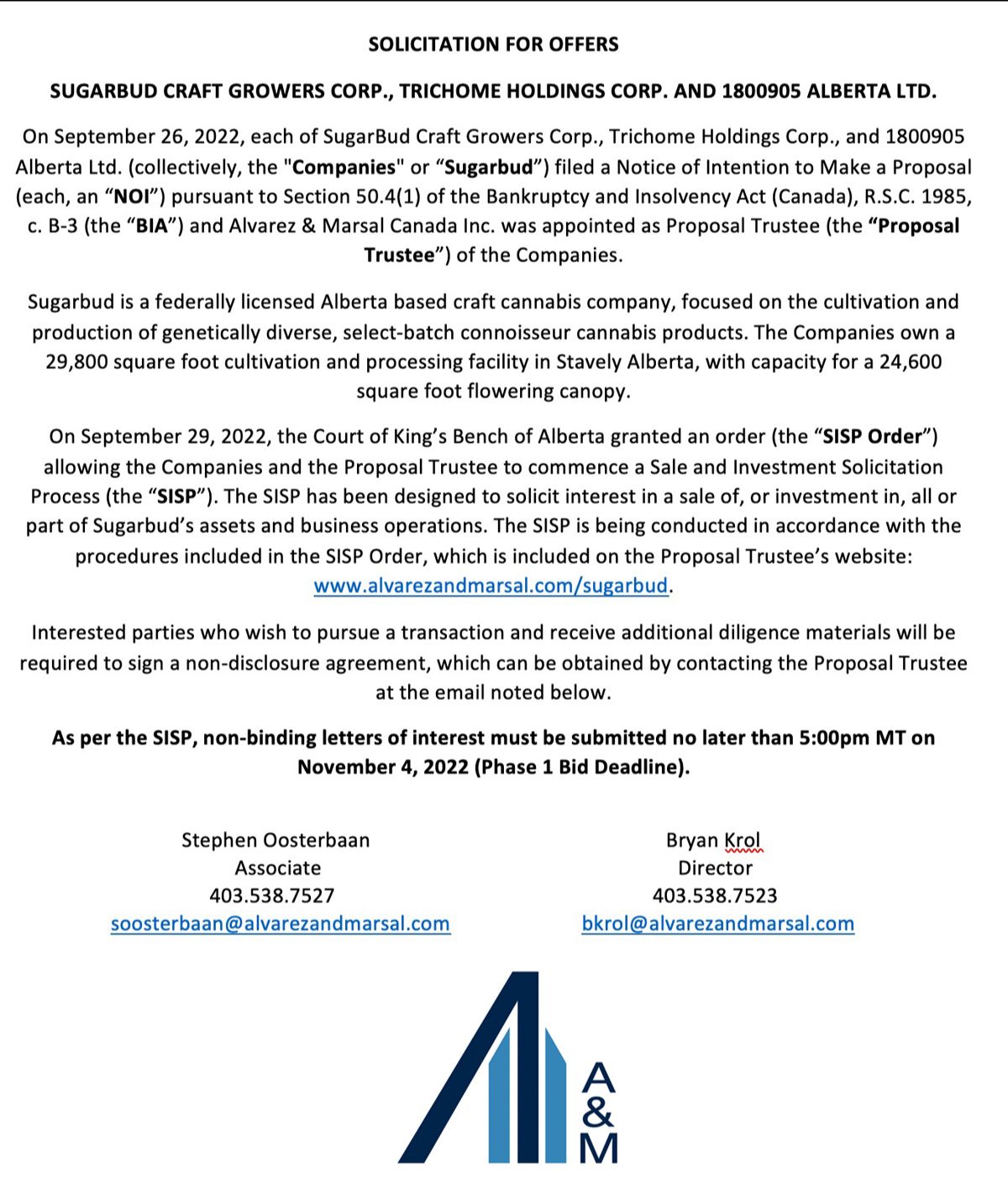 Although cannabis stock indexes had their worst month in more than three years in September, investors may finally see the decline end soon.

Cannabis sales ticked down 0.8% in August compared to July, according to cannabis data analytics firm BDSA. In this exclusive roundup, we find that sales across 11 markets totaled $1.67 billion during August. In Eastern markets, year-over-year growth ranged from -12.7% in Maryland to 29.5% in Florida, while in Western markets, year-over-year growth ranged from -27.2% in Nevada to -3.8% in California compared to a year ago.

Despite a difficult cannabis environment, MariMed has been in an expansion mode. The company has a presence in several East Coast and Midwestern states, as well as fully vertical operations in Massachusetts. MariMed has cultivation and processing operations in Maryland and in the spring completed the acquisition of Kind Therapeutics. It’s also is opening a dispensary in Annapolis. The company also helped to win a license in Connecticut, where it will help launch a cultivation and processing facility. In an exclusive interview, President Jon Levine discusses his plans for the future.

Nova Cannabis’ CEO Marcie Kiziak stepped into the role in March after serving as the company’s COO. Over the course of her career she has focused on M&A and integration work. She recently sat down for an exclusive interview to discuss the company’s Value Buds discount retail banner, operating in the Canadian cannabis space and the company’s plans to expand its retail footprint. Nova currently has 84 retail locations: 58 in Alberta, 25 in Ontario and one in Saskatchewan. It plans to open two more locations in Ontario and one more in Alberta by the end of the year, according to Kiziak.

While many MSOs operating in Massachusetts reserve shelf space for their own brands, TILT Holdings takes a different approach. It reserves most of its shelf space (70% – 80%) for its brand partners or the MSOs that buy in quantity from TILT. This strategy positions the company as more of a supplier for other operators, rather than a competitor. With 60,000 square feet of cultivation and manufacturing space in Pennsylvania, the company reaches about 90% of the retail stores in the state through the wholesale market. In Ohio, TILT, which has 20,000-square-foot manufacturing operations, sells into approximately 40 of the 57 active dispensaries in the state. CEO Gary Santo said in an exclusive interview that the company is looking at expanding plant-touching operations into more states. He also discusses how the company is navigating volatility in wholesale pricing, brand partnerships and social equity initiatives.

Biopharmaceutical Research Company, a Drug Enforcement Administration pharmaceutical cannabis license holder, completed a $20M Series A fundraise. The company received its DEA Schedule I registration in 2021, which allowed it to significantly advance its research capabilities, optimize its cannabis growing operation, and produce novel cannabis-derived products in a federally compliant manner. “This significant new financial infusion will further accelerate our ability to grow as a business, while establishing BRC as an industry leader,” said CEO George Hodgin.

Curaleaf Holdings completed its previously announced purchase of Tryke Companies (dba as Reef Dispensaries), a privately held vertically integrated, multistate cannabis operator. This gives Curaleaf’s national footprint 29 cultivation sites and 144 dispensaries nationwide. “As we continue to unite the strength of our brands, products and cultivation channels to lead the industry, we’re excited to join forces with Tryke to deliver additional value for our customers and retailers in Arizona, Nevada and Utah,” said CEO Matt Darin. The deal is valued at $181 million.